APA includes a set of rules and guidelines for formatting your paper, citing your sources, or for achieving a specific writing style. For an overview of basic APA paper and citation formatting, visit our Introduction to APA page. For information about achieving an APA writing style, see below.

Headings can be placed anywhere in your paper as a way to classify or organize your paper into sections. There are five levels of headings; the first three levels are the most commonly used in course assignments. Levels four and five are typically used in longer papers (e.g., a master’s thesis or dissertation). Using level headings helps your reader understand the organization of your paper. Short papers may not need to use any level headings.Follow these current APA level heading guidelines: 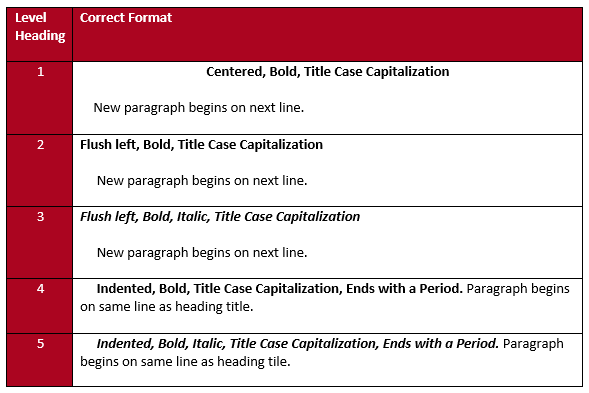 To see how level headings can be applied in an essay, see this example.

Lists, sometimes called seriation, refers to organizing and sharing items in a series.

When a sentence lists 3 or more simple items, use a serial comma to separate each item:

Researchers partnered participants according to location, age, and health.

For complex lists where items listed are lengthy, use a semicolon to separate each item:

You can use a lettered list to improve the readability of the sentence when you have three or more complex items in a list. In APA style, separate the items using lowercase letters in parentheses:

The researchers examined relationships between (a) employee satisfaction, (b) personality types, (c) levels of anxiety, and (d) workplace policies.

Use a numbered list to show a series of ordered steps in a process or a list of questions given to research participants:

Interviewees were given the following questions:

Use a bulleted list to improve the readability of a list when the order is not important or relevant.

If the list includes items that are complete sentences, begin each sentence with a capital letter and end it with a period:

If the list includes items of phrases only, do not begin with a capital letter and do not end with any punctuation:

Use italics for the following:

Verb Tense when Referring to Information from Sources

Because all authors you would be citing wrote their work at some point in the past, when you quote or paraphrase others, use past tense:

Active voice is a style of writing that follows the logical order of the action, from the subject (or doer) to the object (or receiver) of the action. Using active voice will make your writing clear and easy to follow. In active voice, your sentence should be in this order: subject, verb, and object.

For more information on understanding active vs. passive voice, please visit our Active vs Passive page.

Anthropomorphism refers to giving human characteristics to a nonliving object or animal. In academic writing, it is best to avoid anthropomorphism as it can make sentences unclear and confusing.

In this example, the article cannot state anything, but people can.

Using tables, figures, and appendices can add useful information for your readers, while keeping your document easy to read. For detailed help with this, view our guide on Formatting Tables, Figures, and Appendices.